I haven't posted in a long time. This is partly due to how busy I was last semester. I assigned too many writing assignments which resulted in non-stop grading. As such, there wasn't a lot of time to devote to this blog. However I did find some time to work on the larger project. Mainly I have been researching different topics I see connected to the index. There is some interesting literature emerging on the topic of citizen archivists, especially with the emergence of the Internet that I think might be valuable. I have also been thinking about the way collecting has been portrayed in the culture both as a form of celebrated consumption (Antique Roadshow) and as a form of deviant consumption (Hoarders). I just recently submitted an abstract that explores this tension and hopefully it will be accepted. In a couple of months I will be presenting my preliminary work on my grandmother's legacy at a material culture conference about consumption, production, and reuse. I will try to use the blog to update my progress on these ideas.

One of the books I have been reading is Acts of Possession: Collecting in America, which was edited by Leah Dilworth. There are several good essays about individual collectors in American history. The introduction highlighted the early American painter Charles Wilson Peale. The first page of the book prominently displays his painting, "The Artist in His Museum" which I have included here: 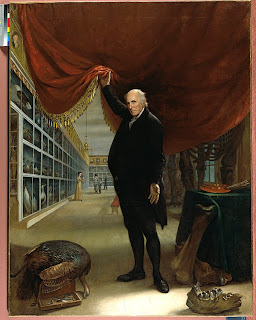 Peale had an interesting history. As a painter, he was most famous for his portraits, which included George Washington and Thomas Jefferson. "The Artist in His Museum" is his most important work, and is a self portrait. Later in his life, Peale created the first American Natural History Museums, which is featured in his painting.

So I return to the index. I checked and indeed she had a card for Charles Wilson Peale. On the front of the card she simply noted that he was a painter and he had a brother named James. Inside are two images taken from a newspaper. The first is a painting by Charles Wilson Peale entitled "John Cadwalader's Family." The second is "Still Life With Fruit" which was painted by James Peale (Charles' brother). Also included is a photocopied essay, "The Peale Family" which focuses primarily on Charles and his connection to the history of museums in Philadelphia. The essay itself was promoting an exhibit of Charles' work at the Philadelphia Museum of Art.

In his essay about Peale, "Inside the Cabinet of Wonders," Andy Sturdevant points out that collecting became Peale's major passion. I think Peale could become an interesting model for thinking about The Ethel Index. Strudevant concludes his essay by writing, "Peale's interest in creating his collection was principally to help the viewer understand the world in a rational, ordered way. However, there are always those objects that inspire in us, the viewers, unadulterated wonder; we're like Peale's museum visitor in the high-waisted golden dress, throwing up our hands in amazement and delight." I do get the sense that my grandmother was attempting to make sense of a complicated world and at the same time, she was able to create something quite amazing in its one right.
Posted by Donald Snyder at 8:22 PM 1 comment: Links to this post