I think the other family member who is as interested in Grand-mom's index is my cousin Erica. Erica shared one of my posts about this blog on Facebook today mentioning that when Grand-mom was asked what should happen to her index after she passed away, she replied, "throw it away. No one else would ever be able to use it or would want it for anything." I think this response really characterizes her attitude toward life. She loved her family, but as mentioned previously was fiercely independent and completely did things her own way. I don't think she created the index for others to use or marvel at--she did it completely for herself.

In her Facebook post, Erica also referred to the index as the internet on paper. My uncle Jimmy also stated that he had told his mother that everything she has been doing over the past fifteen years is already on the World Wide Web. I think this is part of my interest in the index. As a Ph.d student in American Studies, I began studying the Internet in 1999, and actually helped to organize several of the earliest academic conferences dedicated to the subject through my involvement with the now defunct Cyberculture Working Group at the University of Maryland in College Park. My dissertation, which I defended last July, examined issues of labor, consumption, identity, and play in the failed Massively Multiplayer Online Role Playing Game (MMORPG) The Sims Online. Certainly part of my interest in the index stems in my research and teaching (at UMBC) about the emergence of new media. Some of the questions I hope to explore in this blog are the connections and differences between the index and the Internet.

When I describe the project to other people, one of the major questions I get is "why did she do it?" I think this is a fair question. Part of the answer is about who she was. Not only was she a collector, but she was also trained as a research librarian, taking graduate classes in Library Science. Here is an enlarged "business card" that I found in her house while retrieving the index: 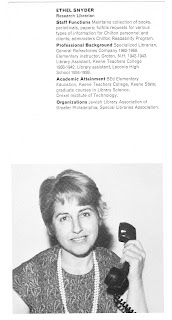 The index reflects not only an attempt to understand the world around her, but also her desire to organize it. In addition, even though the creation of the index does not seem practical, her answer to Erica's question as what to do with the index when she died was. There was no thought of grandeur or importance, only of utility. She felt that no one would be able to use it as a resource. She created the index for herself. If you asked her why she created the index, her answer reflected her pragmatism--she collected and organized these facts to keep her mind sharp. Her mind was so important to her that she decided that she would exercise it every day. It worked, as she was able to keep her intelligence and wit until the end. She trained herself to never stop thinking and learning. This is the aspect of the index that interests me the most.

Posted by Donald Snyder at 9:03 PM