While the focus of this blog is the Ethel Index, there will be posts that are only tangentially connected to the immense catalog. As I have mentioned, Grand-mom's had museum like qualities related to the amount of collections it housed. On the day I went up to get the index, I spent the first hour exploring the sprawling rooms, each filled with interesting and mundane objects. Aside from the index, and the pictures of my family displayed on the wall, there weren't many objects that I felt the need to rescue. As the weeks go on I will post about a couple of the things that I decided to claim. One of the things I was most surprised to find was a single photo album in the basement hidden between a stack of magazines on a bookshelf. The surprise wasn't really finding a photo album, but rather it was the first photo in the album: 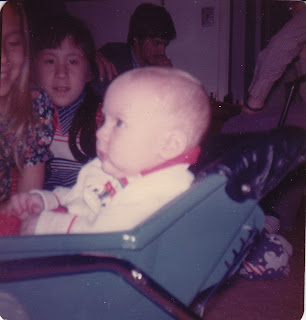 This is a baby picture of myself that I had never seen (or at least have no memory of ever seeing). It is almost as if the photo album was left for me to find. There are actually a lot of interesting pictures in the album. Some of which I will give to family members. Most amazingly there is one of my maternal grand-mother with my mother and one of my cousins in her house in south Philly, which I only have the slightest memory of.

Here is the other picture of note from the album: 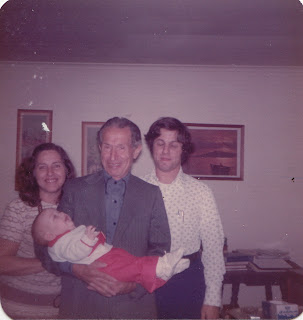 This is the four generation picture. Harry Bloomfield (father of Ethel), Ethel Snyder (Mother of Fred), Fred Snyder (father of Donald) and again baby me. I so wish my father had kept his shirt.